This is a book I found a while ago called 'Lets go to the shops' its to give small children an idea of what to expect when they venture out onto the high street, but after looking at this book children might be thinking 'I don't want to go to the shops!' because the photos are all really gloomy and all the people in them look pretty fed up!

from the flyleaf:
'This book tells young readers about the many widely varied items they will see that can make an everyday visit to their local shopping centre an eye-opener'

well I probably wouldn't go that far! it goes on to say:

A tad bias, but I would definately agree, keep it local and independent anyday!

Although Sarah and myself are children of the 80's and this book was published in 1976 it still brings back a lot of fond memories for me as the high street shown in the book doesn't vary greatly from the one I was dragged along on a Saturday morning. 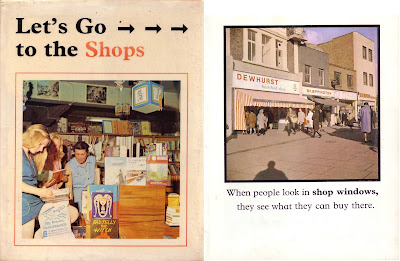 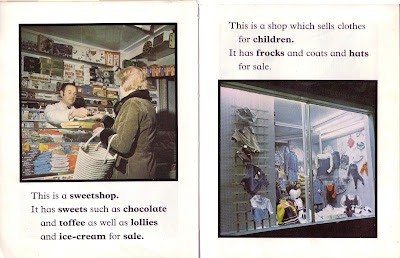 I'm loving the pencil moustache on mr.sweetie man! also the shop on the opposite page has possibly the worst window display ever! - a piece of outdoor garden trellis and what looks like a small explosion of childrens clothing sprayed up the far wall, barmy! 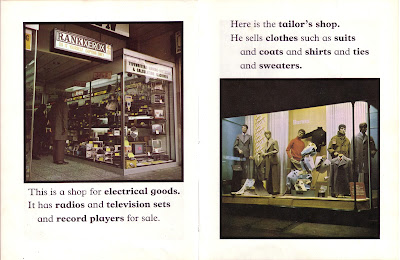 The shop on the left sells 'calculator machines', which I imagine were probably the size of a small washing machine, had wheels on the bottom, flashing lights and a robot voice.
Also check out 'Mr Burt' on the right looking super sauve to the max with his whopping lapels, ace! 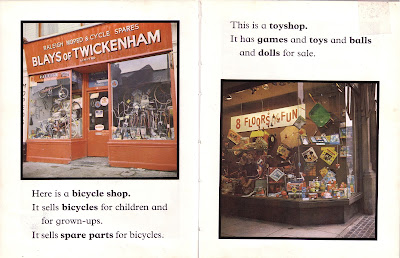 I have to admit I did geek out a little bit trying to spot what toys they had in the window of the toy shop...
Posted by Peter and Sarah Slight at 13:27