A free monthly magazine available to pick up in numerous outlets in our home town of Worthing on the south coast in West sussex recently ran a cover design competition. There was no theme only that it should represent some aspect of the town. For my entry I chose to depict 'The Birdman rally'. For those that don't know about it, its a yearly event held on the end of Worthing pier.

The participants all have to create some kind of flying machine (and usually a silly costume) and then self propel themselves off of the end of the pier. The person who manages to 'fly' the farthest wins.

To cut a long story short, I won the competition with my entry below. It appeared on the cover of the august issue along with a nice little interview with myself. I was dead chuffed, after all its not often you get the chance to be on the front cover of something. 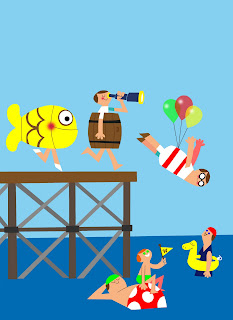 click here to read the article
Posted by Peter and Sarah Slight at 13:46